Google’s second-generation Nest Hub, like much of the company’s hardware these days, looks a lot like the previous version. But in this case, I don’t mind so much.

This is a purpose-built smart display with a camera-less design aimed at maintaining privacy and bedside utility. That second use case gets one of the biggest additions on the second-gen model: a new sleep tracking function. As for privacy, the Nest Hub doesn’t add much new, though the sleep tracking feature introduces some new precautions. The most notable change, however, is a lower price—down from $130 to $99.99 (and sometimes on sale for less). Combined with this unique (for a smart display) ability to track sleep accurately, the value here easily makes the new Nest Hub a top pick for smart displays. 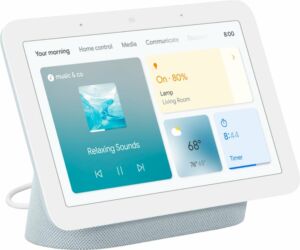 The Nest Hub tracks your sleep using Google’s Project Soli radar technology. You can toggle the feature on or off. The company says that Soli “understands human motion at various scales: from the tap of your finger to the movements of your body,” but the Nest Hub’s application, in both sleep tracking and motion controls, doesn’t appear to need such granular levels.

As it relates to sleep sensing and tracking, the Soli radar chip is the sole piece of hardware used to recognize sleep and count respirations throughout the night, though coughing and snoring events are noted by using the microphone. Google says those audio recordings do not get saved to the cloud or the Nest Hub—only the information that the event occurred is saved to the cloud, along with your sleep times and duration. Otherwise, recognition of snoring and coughing is processed on-device, likely with the aid of the Hub’s on-device machine learning chip.

With this hardware, Google’s using its own algorithms to determine when you fall asleep and wake up. The company says the Hub is able to disregard a sleeping partner by setting it up to focus on a specific area, but it’s unable to decipher whether it’s you or your dog lying there, as the device is reliant solely on motion. So, if you have a pet, you may have to manually delete some of your dog-logged sleep sessions. Unfortunately, I wasn’t able to test its efficacy in partner or pet detection, though I imagine the former is a bit tough to suss out by looking at sleep reports alone.

In any event, the Nest Hub’s sleep sensing was one of the more accurate among trackers I’ve used when it comes to determining when I’ve fallen asleep and when I’ve woken up, though it’s not particularly useful beyond that. I tested the Nest Hub against my Apple Watch Series 6, Fitbit Luxe, Garmin Forerunner 945 LTE, and another radar-based sleep tracker, the SleepScore Max. That last device was developed by CPAP (Continuous Positive Airway Pressure, a class of machines used for COPD and sleep apnea sufferers) equipment manufacturer, ResMed.

Both Google and ResMed say that their sleep tracking shows no statistical difference from a polysomnography lab, but ResMed has at least 10 independent clinical trials that have backed this claim, while Google, as of the time of this article’s publishing, only has one trial, and it was conducted, at least in part, by Google.

As it compares to the other trackers, the Nest Hub showed the highest consistency and accuracy in detailing how long I’ve been in bed, how long it took to fall asleep, when I woke up, and when I got out of bed. It takes an approach to sleep tracking much like that of the Apple Watch in that its goal is more about showing you if you’re hitting your goals (bedtimes and duration) than it is about assessing the quality of your sleep. There are no sleep stages or sleep scores, but your respiratory rate is tracked, along with coughing events, minutes spent snoring, and light changes in the room—all of which is context that could help you understand why you’re sleeping the way you are.

Most of this information can be accessed on the Nest Hub itself, via the touchscreen display, but you can also say phrases like, “Hey Google, how did I sleep last night?” or “How was my breathing last night?” All your sleep data is in the Google Fit app, where you can see a couple more bits of info like your heart rate (pulled in from other health data sharing devices, in my case the Apple Watch) and more specifics on how much time you spent in bed before and after your slumber.

After a week of sleep tracking, Google says you may receive suggestions and educational tips to improve your sleep, and after two weeks of consecutive tracking, Google may also suggest a different bedtime, according to how you’re actually sleeping. In my 39 days of sleep tracking, I received neither tips nor a suggested sleep schedule, and it’s not because I don’t need it. It seems the lack of a suggested schedule is due to me, evidently, never having completed two consecutive weeks of tracking. I don’t know—39 days total seems like it should be enough to at least offer the aforementioned tips.

Sleep Sensing is a free feature for now, but Google says it will begin charging for it next year. There’s been no indication as to whether Fitbit’s sleep tracking and Google’s Nest Hub Sleep Sense will collaborate to improve one another or share data in any way. As it stands right now, Sleep Sensing is not a feature I’d ever consider paying for, especially when other trackers can give me just about the same sense of my sleep, even if the initial awake and asleep detection is among the best on the Nest Hub.

If Google could show more granular data, like sleep stages and a better representation of how many times you woke up through the night, I may be more inclined to consider paying for it. But only if it proved more accurate than other trackers, as these features have proven tough to execute with accuracy. But alas, pricing has yet to be set on Sleep Sensing and such features aren’t currently available.

Google’s implementation of Project Soli also affords you Motion Sense controls for quick, hands-free gestures. Being a smart display, the main mode of interaction will be your voice and occasionally the touchscreen. But for situations that can benefit from motion tracking, like when you’re cooking or drowsily trying to wave off an alarm, Motion Sense and its smooth and capable integration can be useful.

For now, there are only two uses, but they both work very well. Alarms and timers can be waved away with a short swiping motion, and audio playback can be paused and played with a quick high five with the air. Google hasn’t spoken of any plans to expand these integrations.

As for the sound coming out of the speakers, it’s noticeably improved over the first generation. Google says it has 50 percent more bass, and that sounds about right. It’s still not going to rattle trinkets on your nightstand or spill your glass of water, but the sound is much fuller and slightly louder while still maintaining a pleasing level of clarity.

Frankly, there’s not a ton of competition in the smart display space. It’s either this, a third-party Google Assistant display like those from Lenovo and JBL, or an Amazon Echo Show. So, how does the Nest Hub stack up? Quite favorably. Although Amazon’s Echo Show line has solid hardware of its own, the biggest disparity is found in the voice assistant. Google Assistant is better than Alexa, full stop.

Google’s had the lead here for a few years now, and you can thank Google’s unrivaled search capacity for much of this. There’s almost always an answer for your queries, no matter how random. It’s much rarer for the Google Assistant to miss an inquiry entirely, and if it does happen, it’s usually from a bit of syntax confusion (making that another rarer occurrence compared to Alexa).

That’s the other aspect of Google Assistant’s dominance. Not only does it have Google’s search algorithms behind it, but it also has the company’s speech recognition technology, too. Compared to Alexa, an assistant best left to smart home commands, or even Siri, who seems best suited for timers, reminders, and sports scores, there is no competition, sadly.

Comparing the Nest Hub to other Google Assistant speakers—well, there aren’t many available. At one point, you could spend nearly three times the price of a Nest Hub for a (now out of stock) JBL Link View and gain a true speaker for your room or whole-home audio setup. It’s much louder, fuller audio quality made it a great device judged only as a wireless speaker, and the smart display functionality was just a little something extra.

However, the JBL Link View is quite large for a bedside, doesn’t have Google’s excellent Ambient EQ display tech that makes the Nest Hub’s screen all but disappear in the dark, and is hard to find new right now. It also lacks sleep sensing and motion controls, if that’s important to you. It does have a camera (with a physical covering) and IPX4 “splash proofing,” though, so it’s a much better smart display for a living room or kitchen.

The smaller Lenovo Smart Clock—with its four-inch display, compared to the Nest Hub’s seven-inch panel—can be found for about half the price of a Nest Hub. But it doesn’t get quite as dim in the dark, lacks sleep tracking, and can’t play videos. The Smart Clock does have a mic on/off switch, as the Nest Hub does, but adds a USB charging port to reduce nightstand clutter. It also lacks motion controls, but you can literally hit the device anywhere to snooze an alarm, which is pretty satisfying.

If a bedside companion is ultimately what you’re looking for, though, then the Nest Hub may be worth the extra $40-50. It sounds better, looks better, and has more features related to its bedside (sleep tracking), and even a living room (video playback, fuller sound, bigger screen) or kitchen (motion controls) placement.

Technology Plug-in Jeeps and an EV Ram 1500 pickup are part of Stellantis’ new plan
Technology With little remaining of Champlain Towers, how will we find answers?

Cryptocurrency Bitcoin The ‘Form’ Element Created the Modern Web. Was It a Big Mistake?

Cryptocurrency Bitcoin The ‘Form’ Element Created the Modern Web. Was It a Big Mistake?